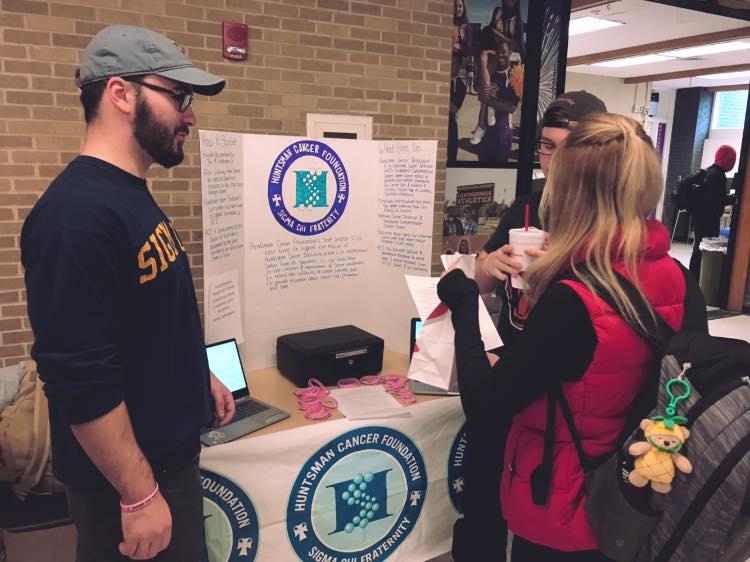 The Iota Omicron chapter of Sigma Chi kicked off their Derby Days fundraising and awareness on October 24, 2019 with talking to students at tables in the WIU University Union lobby. The chapter sold customized pink wristbands that promote Breast Cancer Awareness Month. At the conclusion of Derby Days the proceeds raised today will be donated to the Huntsman Cancer Foundation. 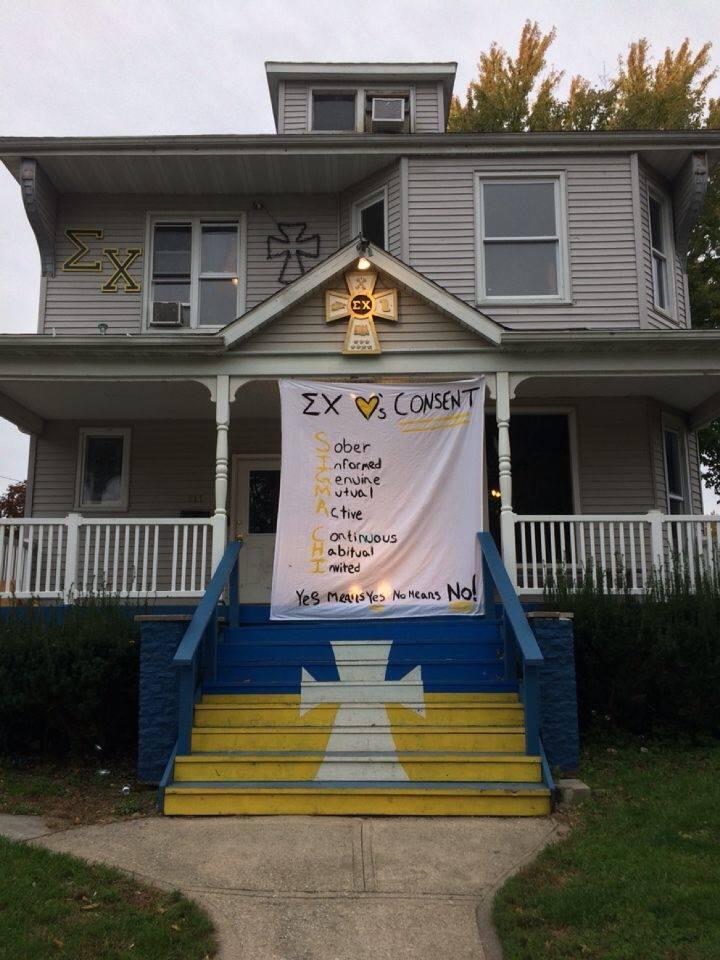 Three Western Illinois University chapters of the Interfraternity Council hung banners from their houses Thursday to stand with rape and sexual assault victims.

“The idea behind the banners came from other fraternities across the country that also showed support for sexual assault victims,” Matthew Hutchison, Vice President of Internal Relations said. “With Take Back the Night being such a huge event at Western, we wanted the IFC community to show our support for an event that has a very powerful impact on those affected by sexual assault.”

Western fraternities and sororities lit up the night on Sunday, Dec. 6 by decking their houses with Christmas lights and decorations. Students were able to vote on the best designs, and decided that the winning fraternity was Sigma Chi and the winning sorority was Sigma Sigma Sigma. Both organizations will receive a $25 donation for their philanthropy.

Several greek organizations set up lights and other holiday decorations on their houses to promote holiday spirit in the annual All Greek Holiday Light Show on Sunday, Dec. 6.

Decorations included colorful lights that radiated in the night as well as one house, Sigma Chi, that went above and beyond.

Anderson wins national award for his passion for a cause

Not even winning a national award could satisfy Mike Anderson, WESTERN ILLINOIS 2014, from continuing his fight against hazing.

Anderson was nominated for the award by the university’s graduate advisor for Greek life programs, Koryna Felt, for helping organize a day devoted to halting the spread of hazing. Originally, university officials expected the anti-hazing program to be a small affair of maybe 50 participants. Anderson, who is chapter Kustos, spread the word on campus so much that almost 250 people attended the seminar on campus on Oct. 20, 2012.

Tue, 19 Feb 2013 23:22:06 GMT —  A student at Western Illinois University has received a national ranking for his work in the greek community.

We asked Anderson what compelled him to speak out against the issue.

Hundreds of people gathered in the third floor auditorium of Sherman Hall on Thursday night to attend the 23rd annual Take Back the Night (TBTN) march and rally.

The theme of this year’s rally, which had to be moved inside due to weather conditions, was Speak Up, Speak Out, Speak Now.

“Take Back the Night is a marching rally against power-based interpersonal violence in our community, campus and Macomb community included,” said Katie Mey, a graduate student in College Student Personnel serving as the TBTN committee chair. The rally gave survivors and witnesses a chance to speak out against life-changing, violent acts.

Greek houses light up the night

Instead of decking the halls this week, Western Illinois University’s fraternities and sororities brought the holiday spirit outside for their Holiday Light Show.

On Monday, 13 Greek chapters added a little cheer to Adams Street, Wigwam Hollow and at other Greek house locations. From 6 to 9 p.m., visitors drove past the light-covered houses and judged the displays. The tour began at the Pi Kappa Alpha house, located at 812 Wigwam Hollow Rd., and afterwards, participants went to Café Aroma for some hot chocolate.

Western’s Iota Omicron chapter of Sigma Chi Fraternity hosts the annual charity fundraiser, known as Derby Days. The WIU chapter will donate 90 percent of the funds raised to the Huntsman Cancer Institute at the University of Utah, a cancer care and research center, and 10 percent to the national Sigma Chi Foundation.

Big Pink Volleyball for 2011 had a tremendous turn out with a total of 234 teams and total money raised coming out to around $5,000. The teams were divided into five brackets including Faculty Staff, Greek, Residence Halls, Club/Organization and Independent.

Over four days of elimination play, teams swarmed onto the courts of the Donald S. Spencer Student Recreation Center. The winners of each bracket were as follows:

Sigma Chi, winner of best fraternity at WIU, strives to network its members within both campus and Macomb community, develop fundamental strategies for the real world, while making memories that will last.

Last semester, the Sigma Chi's raised more than $1,200, all of which went to these charities. Along with donating to their philanthropy, Sigma Chi tries to get involved with the other Greek philanthropies and any community or campus events that they can.

"I believe students voted us top fraternity because we strive to be just that," said President William Steele, "We're a values-based organization and that's what we show. We're very involved all over campus, we donate or attend every charity fundraiser we can, we're respectful toward Greeks and non-Greeks alike and our house is still a fun place to hang out on the weekends."