The Founding of Sigma Chi at Western Illinois University

Sigma Chi at Western Illinois University had its beginnings in the spring of 1986 in Lincoln Hall.

Founding member Joe Ortiz’s brother was a Sig at the Nu Nu chapter at Columbia University and had recently been involved in that chapter's successful re-chartering efforts. Inspired by his brother's success, Joe began the effort to bring Sigma Chi to Western Illinois University. Joe, with help from several others, canvassed the residence halls and slipped a flyer under the door of every dorm room. The founding of the Nu Sigma Chi colony followed, and Joe served as the first president.

In that first semester, the colony operated out of the University Union and slowly gained presence on campus with members known for wearing blue corduroy hats with gold Nu Sigma Chi letters. As the first steps are often the most difficult, the colony endured changes in membership as they struggled to find an identity. 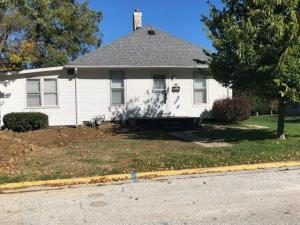 The colony gained traction in the fall semester of 1986. It held its first successful rush out of a the home of two upperclassmen members at 514 Orchard. They recruited ten new members who were known as the "Alpha" pledge class. They held officer elections and the new colony president Joel Ridle and officers dedicated themselves and the colony to methodically completing the tasks required become a Sigma Chi chapter. With their efforts that year, the colony was recognized as an interest group by Western Illinois University and the Inter-Fraternity Council. That semester also saw the chapter’s first participation in homecoming with Alpha Sigma Alpha and Delta Tau Delta. On January 31, 1987, the Sigma Chi Fraternity officially recognized Nu Sigma Chi as a colony and the WIU Inter-Fraternity Council immediately followed suit.

The colony’s first faculty advisor was Sigma Chi alumnus Frank Sorenson from University of Nebraska. Frank was a great promoter of brotherhood. Charles Gilbert, a school administrator and Sig alumnus from George Washington University agreed to join the colony’s effort after a chance meeting with Joel Ridle during the ’86-’87 academic year when Chuck spotted Joel's hat with Nu Sigma Chi letters.

Another keystone moment for the colony was locating the house at 611 West Adams, immediately across the street from Lincoln Hall and the rest of the south quad dormitory complex. The 611 property had been previously taken over by the bank and was being used as a private nursing home with every room filled with clutter and trash. The officers and advisors negotiated a two-year lease with the bank and the spring of 1987 the colony held its rush there. This new property was a crystallizing factor helping the entire colony build a vision reaching beyond where they were towards what they knew could be. It gave the colony a presence right across from campus. It provided a central gathering place. It gave the members the home they had dreamed about.

Over the next couple of years, the colony continued to build on its successes and work to meet the requirements set forth by Sigma Chi for their petition. On their way to becoming a Sigma Chi chapter, Nu Sigma Chi had many honors placed upon them. They won Western Illinois University Homecoming in 1987 with Chi Omega and the colony had the highest grade point average of all fraternities in fall of 1988. Colony president Joel Ridle was named Fraternity President of the Year (1988-1989) by the Inter-Fraternity Council. 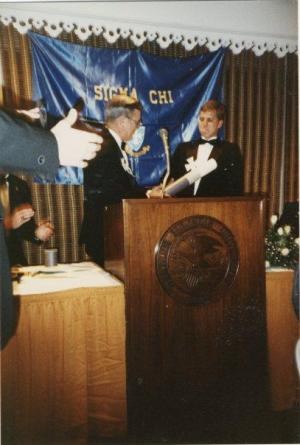 The colony's initiation week began on October 21, 1989. Carter Caul, a Sigma Chi transfer student from Northern Illinois University and Joe Ortiz's Sigma Chi brother David Ortiz from Columbia University facilitated the week of activities along with an installation team from Sigma Chi headquarters. The Delta Rho chapter from Bradley University at Peoria, Illinois served as the installing chapter and performed the ceremonies of initiation where on that day on October 28, 1989, Nu Sigma Chi became the Iota Omicron chapter of the Sigma Chi Fraternity. Parents, spouses, girlfriends, university officials and Sigma Chi dignitaries joined the newly initiated Sigma Chi brothers at an unforgettable banquet held in the Lamoine Room at the University Union where the new Grand Consul Robert E. Joseph presented the chapter's charter to the chapter's first Sigma Chi consul James Purcell.